Venezuelan government could topple on its own, even without new U.S. sanctions, economists say

Threatened U.S. sanctions on Venezuelan oil could further destabilize the beleaguered country, but some economists say there’s already a good chance the Latin American country could collapse on its own.

Venezuela’s 14 months of hyperinflation is among the worst in recent history, and that could be its undoing, according to Edward Glossop, Latin American economist at Capital Economics. “It’s difficult for countries to withstand hyperinflation for more than one or two years at the most,” said Glossop, in an interview, noting its inflation rate has been put at over 1 million percent.

Capital Economics studied hyperinflation in 16 other economies, and found that “history suggests that some form of political transition seems likely over the next year or so…First, countries typically do not usually remain in hyperinflation for much longer than two years,” Glossop noted. 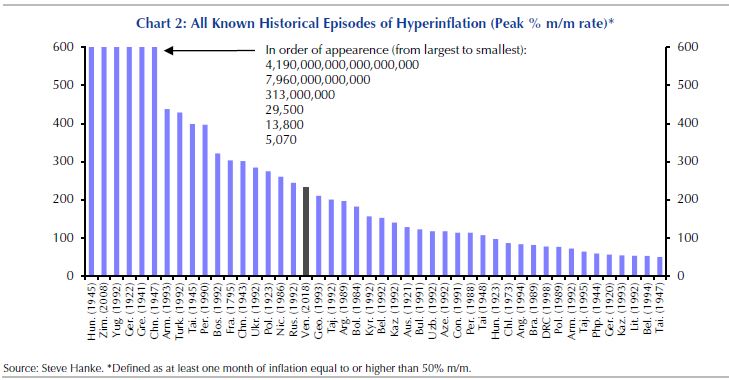 The Trump administration this week threw its support behind National Assembly President Juan Guaidó, who declared himself interim president. Thousands of Venezuelans took to the streets in support of the new government, and Vice President Mike Pence vowed U.S. support for Venezuelans and called President Nicolas Maduro, who remains in power, a dictator with no legitimate claim.

If the U.S. were to cut off oil imports from Venezuela, it would do further damage to an already waning industry and push Venezuela’s economy into a deeper crisis.

Venezuela has the world’s richest oil reserves, just topping 300 billion barrels, but corruption and a lack of capital have left its one time crown jewel PDVSA a shadow of its former self with deteriorating facilities and an inability to maintain production levels. 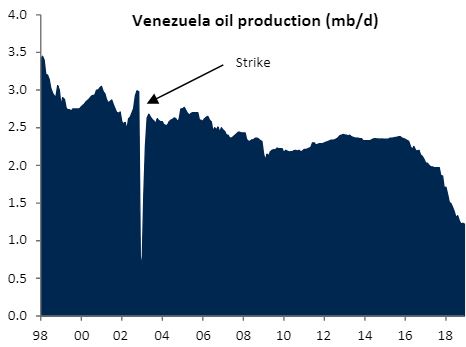 Venezuela’s oil exports are about half of what they were at its peak, and RBC expects a further decline of about 300,000 to 500,000 barrels a day this year, and several hundred thousand more with sanctions.

The U.S. also could cut off the export of diluents, a diluting agent Venezuela needs to thin down its heavy fuel.

At the same time, Venezuela’s GDP has shrunk dramatically and a staggering esimated 3 million of its citizens have migrated, creating a huge loss of economic and brain power. According to Capital Economics, GDP per capita is half of what it was in 2012 and at the same level it was in the 1950s.

While Venezuela has seen hyperinflation for just over a year, it has been in a much longer economic crisis that was exasperated by the sharp drop in oil prices in 2014. Its budget deficit has been in the double digits for the past decade, reaching about a third of GDP last year.

What’s left of Venezuela’s oil industry continues to decline, with the country unable to import the basic capital equipment and materials needed to maintain it, according to Glossop. While it’s unclear what will happen in Venezuela, so far, Maduro appears to be supported by senior military leaders. Glossop said he does not see a long drawn out civil war as a base case.

“Tn terms of prospects for civil war, it would depend on whether you get a big splinter in the military,” he said. “At the moment the army has stuck together…It’s the question of where the country would get the resources to last through a civil war.”

“Hyperinflation should do the work I think. I think the U.S. will watch how things will pan out in the next few months and protests could gather momentum, and things will happen internally,” he said.

Countries received International Monetary Fund bailouts in about half the 16 cases, and IMF-style “shock therapies” have been more common. used in 12 of the 16 cases. The economists said that usually involved some aggressive fiscal tightening, a ceasing of deficit monetisation, and economic and institutional reforms

Helima Croft, global head of commodities strategy at RBC, said hyperinflation has not always resulted in regime change, and it may actually take a while before Maduro is ousted.

“While President Maduro looks increasingly imperiled, we would caution that his ousting may not be imminent and that the situation on the ground is likely to get worse in the near term. The multiple military revolts and coup plots that have occurred in the last 18 months have involved junior officers. The senior ranks for now appear to be sticking with Maduro and they are receiving critical intelligence support from the Cuban government,” she wrote in an note.

Glossop said longer term Venezuela will attract investment again, but any restructuring of the government and PDVSA’s $120 billion in external debt “looks set to be long and messy.”

“There was a secular decline in oil output because PDVSA did not invest in the sector, and invest in exploration and productipn. They have the biggest resources in the world. That’s what ultimately investors will be holding on it,” he said. “It should be solvent int he long term becuase of its huge oil resources.”

Speaking to reporters, National Security Adviser John Bolton Thursday reiterated that every option is on the table when it comes to Venezuela.

“We’re speaking with governments in this hemisphere which have overwhelmingly recognize the new constitutional government. We’re talking to our colleagues in Europe and elsewhere to demonstrate widespread political support for the interim presidency, and we’re moving to do everything we can to strengthen this new legitimate representative government,” said Bolton.

Bolton said Pence had spoken to Guaido, who has also been supported by Brazil, Argentina, Canada, Chile, Costa Rica, and Ecuador, among others. Mexico has not joined the supporters but has instead called for talks between the two sides.

Oil analysts say it’s unclear if the U.S. will seek sanctions on oil.

“I think it will depend in part on how strong the push back is from the refining lobby and how concerned the administration is about tightening the market. If these events were taking place in October, I think the administration would have ruled out oil sanctions. With softer prices, they may believe they have more leeway to pursue a key foreign policy objective. That said the administration may opt for a staggered approach and do a diluent ban before going for barring imports,” noted Helima Croft, global head of commodities strategy at RBC.

John Kilduff of Again Capital said the Trump administration may not wish to sanction Venezuelan for fear of hurting U.S. interests.

“I think Trump is going to avoid putting the sanctions on because it would be really harmful to our Gulf Coast refiners,” he said. 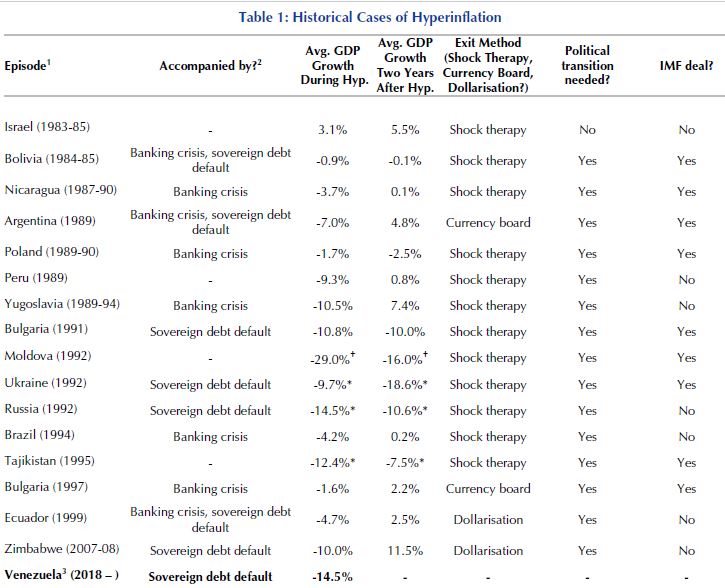 Christopher Boyle
Prev Next 1 of 124
This site uses cookies for various purposes. We're legally required to request your consent. Click accept to close this message. If you do not agree, please immediately exit the service or click more to learn why.
Accept More
Privacy & Cookies