IBM, P&G and United Technologies are all saying something very important about the stock market

Market psychology is shifting, and you can see it in the way investors are responding to earnings news.

Take a look at IBM, United Technologies and Procter & Gamble – all flying higher after positive earnings news. IBM, for one, was up 8.3 percent on Wednesday, its biggest one-day gain since October 2017.

Good earnings news wasn’t all that good for stocks in the second half of last year, but with expectations lower and stock prices sharply lower than the peak last year, it may be now.

“It’s healing. It’s by no means bullish, but it is making the transition from a bear market psychology to a healthy, more normal psychology, consistent with the more positive parts of what is now a 10-year uptrend,” said Julian Emanuel, chief equity and derivative strategist at BTIG. Emanuel had been expecting a more positive response to profits this quarter, versus the July and October reporting periods.

“The ‘good news is bad and bad news is worse’ psychology started in July. It obviously accelerated in October, and you saw broader market declines on growth fears,” he said. Emanuel said the new dovish tone of the Fed helped reverse the gloom that surrounded the roughly 20 percent decline in the S&P 500 late last year.

“Given the fact the Fed reduced the probability of recession this year, and perhaps early next, in a more normal market environment where valuations aren’t as much of a concern, you’re going to see more rational reactions to earnings results,” said Emanuel. “Some of these reactions are even more than we thought they were going to be. The underlying tone is perhaps more positive, but at the same time, you’re still seeing disappointing results getting punished, and that’s okay.”

Paul Hickey, co-founder of Bespoke, studied market reactions when there were a large number of negative earnings revisions, as there are now. For the S&P 500, he found it gained an average of about 3.3 percent by six weeks into the earnings season when negative revisions were this high or higher. 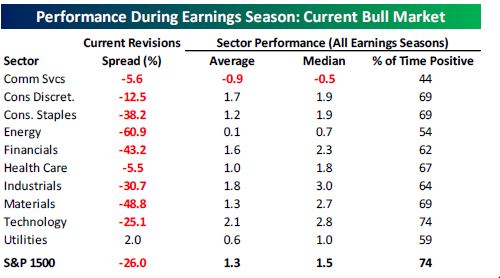 Earnings are expected to be up by about 14 percent in the fourth quarter, compared to the more than 23 percent gain for the prior fourth quarter. Profit growth is also expected to continue to decline, with analysts projecting first quarter growth in the single digits.

Emanuel said the reaction in earnings stocks is a positive sign for broader sentiment. “It indicates a greater willingness to accept the idea of peak earnings growth, which clearly you had last year at over 20 percent,” he said. “If you get earnings growth, somewhere around five or six percent, at these valuations, and int his kind of benign interest rate environment, stock prices can move higher and that’s the start of a transition to a normal market environment.”

Emanuel said “juicing earnings with the creation of the tax law created a less normal environment.”

“A lot of these companies are starting to talk about reinvesting for growth and dialing back some of the buybacks…and the market isn’t afraid of that,” he said.

RBC chief equity strategist Lori Calvasina studied the comments of companies that have reported earnings through last Friday, and found the majority were talking about a positive environment.

“The tone around demand and the underlying backdrop improved last week. By our count, 36 companies have described conditions as healthy with 23 pointing to mixed or weak underlying conditions (in last week’s update, it was more evenly split),” she wrote in a note. “Among those in the mixed/weak category, specific geographies continue to be the primary culprit cited, with more citations of European and specific European countries than China or Asia. Among the Financials, fixed income has also been a commonly cited problem from 4Q specifically. On tariffs and the trade war with China, most companies commenting have suggested that the impact is manageable or minimal, or that it’s too early to tell.”

Calvasina, in response to an email, said stocks can trade higher through earnings uncertainty.

“ln 2015-2016 the stock market bottomed long before earnings expectations for 2016 hit their low point. That history suggests we do not need to wait for all the earnings clouds to clear before jumping back into the market,” she wrote.

Hickey said companies reporting earnings continued to decline ahead of the start of the fourth quarter earnings season, but their declines were smaller than those in the prior quarter.

“Heading into earnings season last quarter you may recall how companies that were reporting ahead of the official start of earnings season were reporting strong results but their stocks were getting killed,” he wrote. The 48 companies in the S&P 500 that reported from the middle of September into early October, only 10 traded higher on earnings reporting day. The average decline was 3.8 percent.

For this quarter, the 48 companies reporting early reports from mid December to early January, declined less, with an average drop of 1.98 percent. About 70 percent of those 48 companies beat earnings expectations.

Hickey said it appears the trend is changing to one where beats will be rewarded, but it’s early in the reporting season to determine trends.

“When you see positive returns following earnings, it’s a sign that expectations were really low. From our perspective, it’s more a function of what sentiment is heading into earnings,” Hickey said.

American and other airlines are gearing up to report earnings. Here’s how to play it

John Colascione
Prev Next 1 of 813
This site uses cookies for various purposes. We're legally required to request your consent. Click accept to close this message. If you do not agree, please immediately exit the service or click more to learn why.
Accept More
Privacy & Cookies