By Chuck Ross On Jan 22, 2019
Share
How To Register and Own Website Addresses (.com, .net, .org, etc) For Under $20/year. [REGISTER DOMAIN NAMES]
To comply with FTC regulations, all links could lead to commissions paid to the publisher. Please see Advertising Disclosure in sidebar. 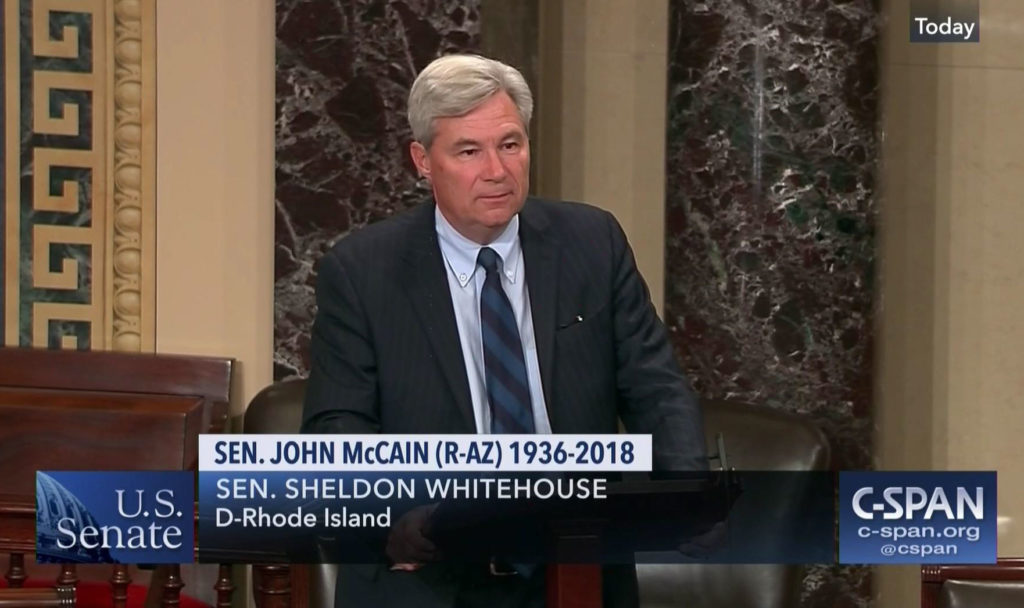 WASHINGTON – A Democrat on the Senate Judiciary Committee is calling for an investigation of House Republicans he claims have colluded with the Trump White House to derail special counsel Robert Mueller’s Russia probe.

Democratic Rhode Island Sen. Sheldon Whitehouse did not cite evidence to back up his allegations. But speaking to the hosts of the “Skullduggery” podcast, the Democrat said that an investigation should be opened into whether President Donald Trump’s Republican allies sought to “impede and throw sticks into the spokes of the Mueller investigation.”

“It definitely needs to be investigated, in my view,” Whitehouse said on the podcast, which is hosted by Yahoo’s Michael Isikoff.

“Whether it amounts to criminal conduct or not, clearly the efforts of the House Republicans were designed to impede and throw sticks into the spokes of the Mueller investigation.”

While many Democratic lawmakers have criticized House Republicans for questioning the premise of the Russia probe, Whitehouse is the first Democrat to specifically call for an investigation of his GOP counterparts.

GOP leaders like Devin Nunes, Jim Jordan and Mark Meadows have asserted that there is no evidence of collusion between the Trump campaign and Russia. They’ve also led an independent investigation into the FBI’s use of the unverified Steele dossier to obtain surveillance warrants against former Trump campaign adviser Carter Page.

The Republicans have accused FBI leaders of misleading the federal surveillance court by failing to reveal that the dossier was opposition research and was funded by the Clinton campaign and DNC.

House Republicans have also led the charge against former FBI officials like Peter Strzok and Lisa Page, who were caught sending anti-Trump text messages while working on the Russia investigation.

In this clip from the latest @SkullduggeryPod, @SenWhitehouse alludes that House Republicans colluded w/ the Whitehouse in order to impede & throw sticks into the spokes of the #MuellerInvestigation and it needs to be investigated. #SkullduggeryPod @YahooNews @Isikoff @dklaidman pic.twitter.com/i97wmFg32V— Skullduggery (@SkullduggeryPod) January 21, 2019

“If that is what they did, the only thing that stops that being a crime is the contact with Trump’s lawyers and the corrupt intent,” he continued.

Chuck Ross is an investigative journalist for independent news and media organizations in the United States. Ross also contributes to sites such as The Daily Caller, Fox News, C-SPAN, The Daily Signal and The Western Journal.

Disclaimer (varies based on content, section, category, etc.): News articles on this site may contain opinions of the author, and if opinion, may not necessarily reflect the views of the site itself nor the views of the owners of The Published Reporter. For more information on our editorial policies please view our editorial policies and guidelines section in addition to our fact checking policy and most importantly, our terms of service. All links on this site could lead to commissions paid to the publisher. Please see Advertising Disclosure in sidebar. Subscribe to Chuck Ross (via RSS)

Op-Ed: Why is Fräulein Hillary Comparing Trump to Hitler and Conservatives to Nazis?

Op-Ed: Why Is Joe Biden Supporting Mexican Drug and…